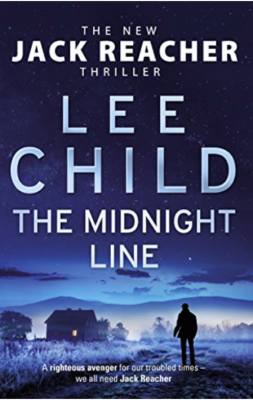 The latest in the Jack Reacher series hardly needs a review. The point I want to make is that the latest bestseller by British former journalist Lee Child (whose choice of pen name is also a story worth telling) is available from the library. Along with the latest Dan Brown, and the latest Sara Paretsky. Before I could get my act together to buy them on line or at the airport, I found one of them on the shelves in Ivinghoe, and downloaded two of them through the library app Overdrive.

Why do I read the Jack Reacher series? They are well written (far better than Dan Brown who tells a good story but has an infuriating style). The plots are well researched. In Midnight Line  I found out and understood a lot about the epidemic of ‘painkiller’ prescription drug deaths in the USA, and the criminality around illegal supply which is the basis of the plot. The action is set in Wyoming, which is so beautifully described I wanted to go there immediately!

Like most Jack Reacher, the book doesn’t rely on violent crimes against women. They are formula written, feature violence, strong women in subsidiary roles, and clearly uphold good against evil in traditional style of the Western. Although probably a bit less demanding than some other bestselling legal or political thrillers the pages turn equally fast.

And above all they are ‘safe’ and good triumphs over evil, so quite an escape from real life.