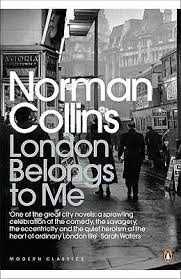 London belongs to me

Set just prior to, and in the early days of, World War Two, this epic by contemporary writer Norman Collins delves into the lives  of ordinary families living in an ordinary London street. We meet some amazing characters including faded former actress Connie, a self-styled Professor of Spiritualism, and the seemingly genteel widow Mrs. Vizzard.

The action centres around the occupants of the lodging house owned by Mrs. Vizzard in Dulcimer Street, South London. The first family we meet are the Jossers, on the day Mr. Josser retires from his job as a  clerk in the city, bringing home the much-coveted mantle clock he received as a parting gift.

The characters were so well drawn that by the end of the book I felt I knew them all.

A long read but I found it hard to put down and would highly recommend it to all who enjoy social history and are interested in the the 30s and 40s.

It was made into a film starting Alastair Sim and Richard Attenborough, and was a Thames TV series in the 70s, I wish I’d seen it.